Samuel Houston of Texas is a Relative of the Chisum Clan

For over 30 years, I have been doing genealogy.

Many great researchers have found elusive ties to people and places that I could never fathom in my wildest dreams. What I do is a little different. I see connections where people have not ventured, or simply have overlooked.

Samuel Houston, the 1st President of the Republic of Texas has been one of those family stories from the Chisum clan that has gone nowhere... until now. My Chisum line swore that we were related to Sam Houston. Some said that we were a direct descendant. When that research did not pan out, many gave up.

But we are related to Sam Houston. That is not fiction, or a family story. It is fact. 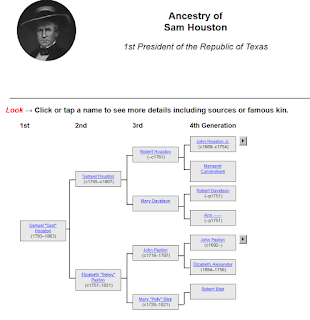 and, Margaret Cunningham, his wife.

This couple had about 20 documented children.

One of their sons was:

John Houston, Jr. and John McClung Houston, I believe, are the same person. Dates and places match up, as well as spouses.

Look for yourself, but the mystery of the Chisum clan and Sam Houston has been solved.