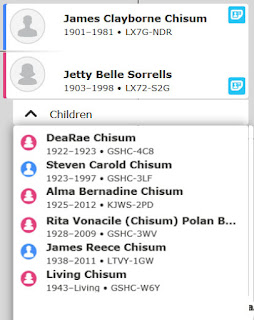 Jettie Belle Sorrells was born in Big Valley, San Saba County (Mills County), Texas on September 13, 1903. She moved around to do migrant labor like pick cotton and therefore only had a third grade education. When she met James Chisum, it was love at first sight for both of them. They could not wait to get married and six days after her 18th birthday against the wishes of both their families, Jettie Belle and James Clayborne married on September 19, 1921, Wilbarger County, Texas, United States.

The couple began a family on the oil fields of Texas. James would work with the men and Jettie would wait in their tent. Yes, the young family lived in tents. The men would be hospitable to my grandmother until they figured out she could cook. Then she was employed, babies in tow, to cook and bake for the oil crews.

Their first daughter, DeaRae, was born blind in one eye and poor of health. With an outbreak of a water borne illness, DeaRae did not see past her two years of life. With better nutrition and positions within the oil fields, their successive children saw much better health and living conditions.

Their life appeared happy... until they were wanted by the FBI. Sometime during the reign of Bonnie and Clyde (circa 1933-34), Jettie and James were pulled over in their vehicle with federal agents' guns ablazing. James was a tall, lanky man and Jettie a short woman who were mistaken for the infamous leaders of the murderous robbing gang. After their identities were confirmed, the couple was allowed to go about their way, alive and well.

After moving from Texas to Arizona for James' health in 1939, Jettie experienced the life of a frontiers woman yet again. A home constructed by James in Coldwater (Avondale, AZ) saw the monsoon season. During one of the many electrical storms in Arizona, Jetty opened one of the two outside doors to see a ball of blue lightning enter the house and roll right out the other door. Needless to say, the house burned down sometime in the future (apprx. spring of 1943) burning all their keepsakes and documents. In early 1943, Jetty became pregnant with their last child, my mother, who is still alive. The last of their children living as of this publication (2019).

So James built an adobe home from scratch on Pacific Drive in Avondale, Arizona a few yards north of the train tracks. The home came with a separate laundry that Jettie ran for many years as a business. In 1943, the only doctor's office was in Buckeye, Arizona that was close enough to deliver their last daughter. With Jetty being 40 years old at the time, my mother was born with the cord wrapped around her throat. Blue in the face, the delivery nurse made a snap decision, through their infant daughter into the air, and smacked her in the chest. The baby began crying and Jettie went home with a live baby that day.

1943 was war time. World War II still raged in Europe. It was a time of turmoil. With a new baby, Jettie had to receive stamps from the United States government for diapers, especially because these items were made of cotton. 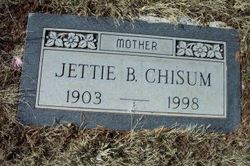 She passed on May 3, 1998 at the age of 94. She outlived James by seventeen years and one of her sons, Steven Carold by one year.

Remember that Jettie Belle Sorrells Chisum lived through a world in constant change. Two world wars. Transportation went from horses, horse and buggies, crank turned engines for cars to the model A and T then racecars, airplanes, jet fighters, as well as indoor plumbing, home electricity... and the space shuttle. This frontiers woman lived through it all that we take for granted today.

Source: Find a Grave
Granddaughter's recollections
Posted by Undawnted at 4:28 AM