He worked in the oil fields with an 8th grade education. A weak back drove the family with four children, one already deceased, to Arizona where the doctors believed the arid desert would be better suited for James' health. So in 1939, the Chisums moved from Texas to Arizona. 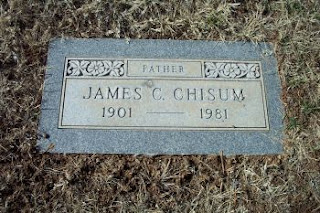 Out in the desert (Coldwater, now Avondale), James built the family a home but the house burnt down. Upon discovering Jettie was pregnant, at age 39, with their sixth child, James built an adobe home with an attached laundry on Pacific Drive in Avondale, Arizona. The home still stands as of this writing.

Jettie worked the laundry up until their retirement to Payson, Gila County, Arizona circa 1970. James grew a garden and raised chickens on their one acre lot with private well.

After a series of strokes and contracting pneumonia (?), James passed away. He and Jettie married when he was 21 and she was 18. It was love at first sight and they remained together for over 59 years.

He died on October 30, 1981 in Payson, Gila Country, Arizona and is buried at Mountain Meadows Memorial Park and Crematory along with his wife, Jettie Belle Sorrells Chisum.'

Posted by Undawnted at 3:32 AM