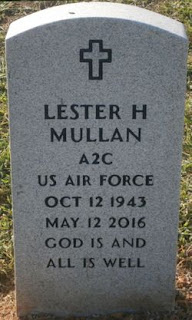 Lester Harold Mullan, 72 years of age, passed from this life on Thursday, May 12, 2016 in Manor Care Nursing in Springfield, Missouri.

He was born on October 12, 1943, in Cedar Falls, Iowa to Harold Albert and Pearl Veronica (Chasky) Mullan.

Lester had a varied life of hopes and dreams. In his youth, he spent time in the Minor Leagues (baseball). Next he joined the Air Force and was stationed at Luke A.F.B. in Arizona. There he met his wife, Anna.

When he left his four years of service, he worked as a machinist at Caterpillar Company. As he upgraded his skills to Quality Control Inspector, he moved his family to San Diego, California, and later back to Phoenix, Arizona where he worked at General Dynamics.

He was buried in Missouri Veterans Cemetery in Springfield, Missouri.

His care was entrusted to Walnut Lawn Funeral Home, Ltd. DeGraffenreid-Wood-Crematory, which the family is grateful for their service.

Source: Find a Grave
Daughter's Rewritten Update
Posted by Undawnted at 1:48 AM